Being gluten free and social 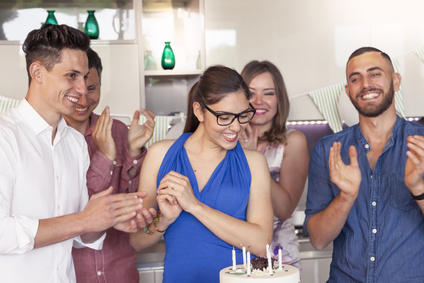 Natasha is a young and very active lady, in fact she has just run the Great Wall of China Marathon, wow! She is has a very slim body and has been very fit until the beginning of the year when she seemed to catch one cold after another. She just did not seem to be able to get healthy anymore. After many doctor’s visits she was initially diagnosed with thyroiditis and more recently with Hashimoto’s.

Based on her diagnosis she was put on medication, bioidentical hormones to give her body what her thyroid is not producing in sufficient amounts. She’s not really been explained what Hashimoto’s is and she was very confused about hypo and hyperthyroidism because she had symptoms of both (which is not unusual with Hashimoto’s). Because Natasha is a sportive person and she knows that nutrition is important to keep fit and healthy, she reached out to a nutritionist. She learned that she needs to cut gluten, animal dairy and added sugar out of her diet and that with this diet plan most people recover from Hashimoto’s. Since she found this advice very extreme, she decided to go for a second opinion. The second nutritionist said there was no reason to follow any strict diet but that it was important to have a healthy varied eating plan based on the food pyramid. This is how I met Natasha: seriously confused and not really understanding what’s wrong with her thyroid.

Hashimoto’s is an autoimmune disease of the thyroid and what it means is that the immune system is attacking and breaking down this important gland; in other words it’s serious. The good news is that we can do something about the root cause of the disease. I explained to Natasha what Hashimoto’s means, why she is experiencing hypo and hyperthyroid symptoms and confirmed what the first nutritionist said about following a strict diet as a first step to getting better. Now that Natasha understood her situation she made a choice: she wants to be healthy and she immediately started going gluten free, dairy free and added sugar free. She is very brave, extremely strict and learning fast.

About a week into her new eating plan she went to a birthday party of a good friend. She went prepared, she took her own food. What she wasn’t prepared for was the pitying of her friends. “Oh, you can’t eat that piece of cake? Not even a tiny cookie? Poor you.” She didn’t want their pity, it made her feel miserable. Yes, she is sick but she decided to take her health into her own hands and she was doing so well. The mix of emotions from being scared to being tempted to hating the pity was not making it easy to keep gluten free for better health.

Going through a phase of self pity, doubt and being scared is normal and very understandable when you’ve just been diagnosed with an autoimmune disease. Natasha has been incredibly strong and positive considering but this social situation was an emotional challenge for her. Here is what I advised her:

Start making the focus of social gatherings the people you meet and not the food. Be prepared (and she was) with taking your own safe food, you can take some extra to share with others. When someone offers something you decided not to eat or drink, just say “Thank you but I’m not eating sweets. Thank you, I’m not drinking beer.” And then pass it on. (Notice the difference to “Sorry, I can’t eat that, I wish I could”). Think of it like a vegetarian at a barbecue, she will happily stick with the salads and vegetables and not feel strange about saying “no, thank you” to the meat. It’s not a diet, it’s more about finding a new identity.

If anyone asks for an explanation, you can just say “I’m feeling much better not eating gluten, so don’t worry about me. I’m happy to explain more at a different time, now let’s enjoy the party”. That way, you can avoid people feeling sorry for you and for those who are really interested or concerned you give the opening to explain it later. In a one on one situation and not at a party, it’s much easier to explain that going gluten free is important for your health and that’s why it’s so important for you. If the feeling of pity comes up you can ask for acceptance and support instead.

There are other steps back to health that go hand in hand with cutting out gluten, dairy and added sugar. One step at a time. Natasha is taking them fast and with determination, she is a real inspiration for others and she’s right on track for claiming her health back.

Take a step on your road to better health, join our amazing community and give yourself the chance to discover inspiring information that has the power to change your life! If you would like to share your story, please feel free to contact me.